Outwork is a large converging horn for remote listening installed on the south coast of England at Newhaven Fort, East Sussex.

The installation draws on late C19 acoustic design to retrospectively equip Newhaven Fort with mid-range acoustic sensing. This large 'telephonic scope' anticipates the air board's experiments with ground to air communications and the sound mirrors of the early C20.

This is a device for 'overhearing' in the sense of listening too much; a problem intrinsic to sound and field recording practices and one which is unable to rid itself of associations with surveillance: practices of eavesdropping or ‘listening in’, listening at a remove, etc. 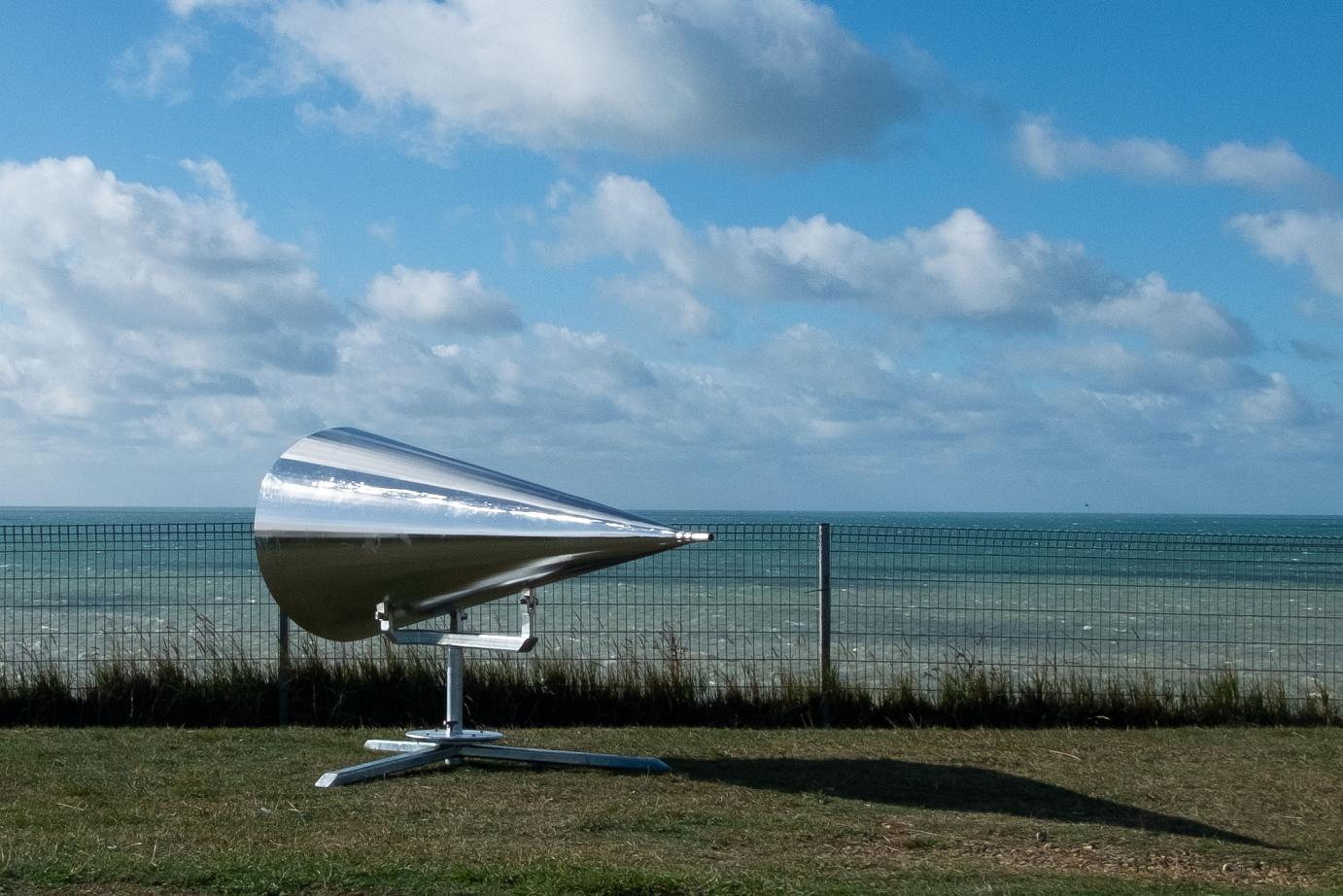 We are shortly due to be entering a state of 'global connectedness', where economic rationalisation (aka 'taking back control') in this locale can be equated with the materialising of 'unidentified' gas plumes on the coast (1), brownfield development 'overspills' onto green land (2) and raw sewage pumped into the sea from shortfall pipes (3).

Outwork proposes a new defensive imaginary for Newhaven Fort; one in which it might monitor anthropogenic sound and its impact on the locale, where ecoacoustics could play an role alongside the National Costalwatch; which rose to fill the gap left by the 'rationalisation and modernisation' of the Coastguard. As DW Eisenhower once said "the uninspected deteriorates."

The fort, by design, is engineered to be outward looking; concerned with the near distance and mastery over it by vision. Bar the ecoute (4), the application of sound in C19 defensive strategy seems particularly sparse;

Yet around the time of the completion of Ardagh's fort at Newhaven, Thomas Edison was sketching plans for a listening device with a range of two miles. By 1879, the 'Improved Edison Megaphone' for long-distance work, replete with speaking trumpet, started to appear in print.

The outgoing element of Edison's invention is all we have left under that epithet; the 'converging horn' quickly domesticised into the ear trumpet (obsolete) and the pinaud horn (still in use).

Given Edison's marketing machine in C19 UK, it seems likely that this device would have been known to the military. The two mile listening sector at night or during a sea fret might have been an ideal addition to the fort's outwork; the defences constructed beyond the line of the main works, and perhaps even part of a fort's design had Athanasius Kircher's ideas had been more widely adopted.

Outwork is a opportunity to test out this proposition in a new ecoacoustic context.

1. Chemical Incident at Birling Gap, August 2017 - https://bit.ly/2wKiY6x - and other unidenfied leaks in Seaford in the autumn.
2. Brett Aggregates Proposed site in Newhaven. The document 'Nearby Noise Sensitive Receptors' clearly shows the overspill onto green land adjacent to Newhaven East Beach - https://bit.ly/2HO711B
3. Southern Water's emergency release of 17 million litres in July 2017 - https://bit.ly/2xNiPPv
4. A small gallery situated in the foreground of the glacis, connected to a main gallery running parallel to the covert way, where a miner would listen for the noises made by enemy miners, thus enabling countermines to be dug to intercept them.

Outwork was commissioned for Fort Process 2018 and is now permanently installed at Newhaven Fort.

Thanks to Alastair Strachan, the Fort Process team, Lost Property and Kath Dudley